Calvin Ramsay has not enjoyed the smoothest of transitions to Liverpool due to an injury identified on his first day at the club, but he is training now and Jurgen Klopp is ready to get to work.

The 19-year-old joined in the summer from Aberdeen, arriving as a highly rated right-back with senior experience and plenty of potential to tap into.

What many did not expect was that he would be sidelined for nearly three months thanks to a “minor” back injury, ensuring that his transition to the team has taken a different approach.

But Ramsay has now joined his teammates on the field, taking part in a full workout for the first time in midweek, the start of a journey back to match fitness.

Klopp is “over the moon” about having the young defender in the mix, but told reporters on Friday that the plan for his return to action is likely to see him link up with the under-21s first.

“Calvin is not ready to play, but over the moon he can train now,” Klopp said. He now he needs to train, train and train. There will be a time when he plays for the under-21s so he can play a game.”

It’s a route the Reds must also take with Caoimhin Kelleher, who has also been in the treatment room since the start of preseason.

Back in full training. One step closer! ? pic.twitter.com/sUw7piiLkt

With the injury now behind Ramsay, all focus is on his development on the pitch and Klopp knows, like all young talent, that “the sky is the limit”.

“He is an outstanding talent,” Klopp said.

“We explore it. I’ve seen a lot of your games. He did exceptionally well. He is a real player, he is really involved in everything. A true talent. I’m excited for him.

“Then he came here and had a back problem and has been out ever since.

“I saw him now two or three times in training, but these are the first sessions. Now we know a lot more about him as a kid, outstanding, well-behaved, friendly, self-assured, a really good kid. 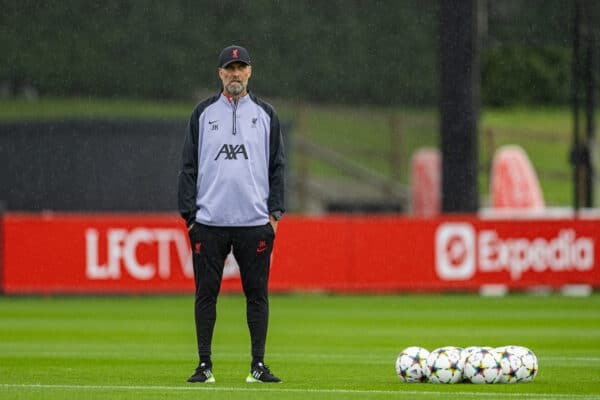 “And now we start to work. How it is for all of them in that age group, the sky is the limit so I have no idea where it can go for him.

“But the start of his career was really good, we had a bit of a break, but better now than next year – we got through it and now we have to make sure we can work with him as much as possible to give him the chance to have the best career. possible.”

It could be that Liverpool’s debut comes in the Carabao Cup against Derby on November 9, but there are plenty of boxes for Ramsay to tick before then.